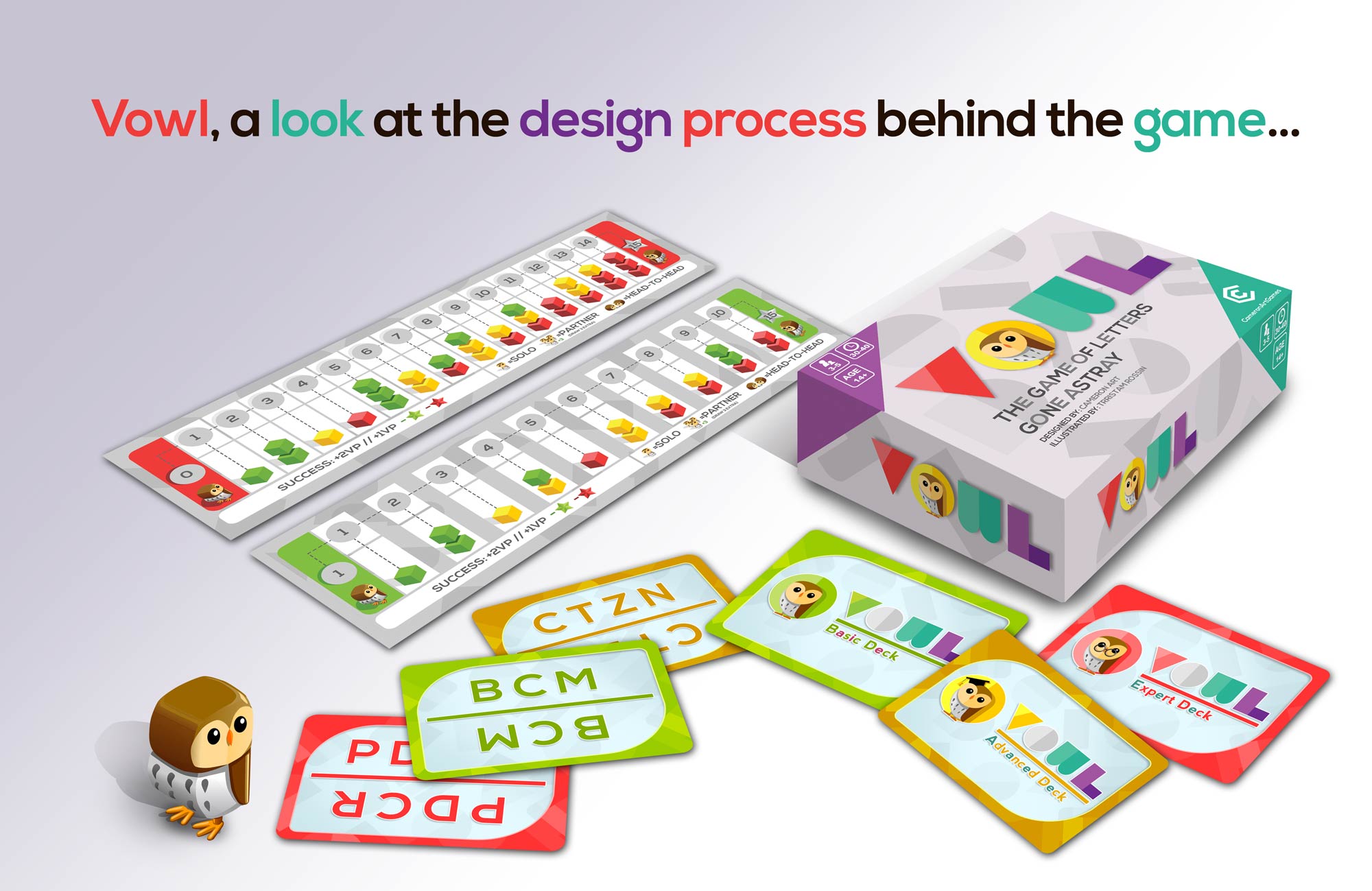 I was approached by Cameron at Cameron Art Games a few months ago with the proposition of doing the art and graphic design for a game called “vowel” a light and fun game based reconstructing words with the vowels missing. What automatically struck me was the simplicity and elegance of the game idea, also it’s accessibility as a game.

The first thing I always do as a designer is to gauge the audience and demographics, find out what style is going to suite the game and work for the people playing it. This was a challenge for this project, most of the time in game design you have a subject matter, a time and a place which makes it easier to design. Vowel (as it was originally called) fell firmly into an abstract genre so it’s my job to develop a feel from scratch. The first thing the game required was a hook, something that would add some originality to the design. The first thing to happen was a name change, from Vowel to Vowl with the incorporation of an owl as the main character or mascot for the game. This was done for two reasons, the owl works well historically as a character of knowledge and intellect, something we wanted to get across with the game being based on constructing more and more complex words. The second was to ground the abstractness of the game, character branding, even at a basic level can do just that.

Next was the overall design and aesthetics. We decided early on it should take on a minimalistic style, the game has a simple mechanic which needed to be reflected in its design. I am a big advocate of function over design, if it’s not needed, throw it out. As the base cards where words with the vowels missing, we simply needed to reflect that and the difficulty of them, nothing more. I decided the best route was to create all the art in a vector format to keep it as clean as possible, early examples included slight textures but where soon removed for a tighter feel. 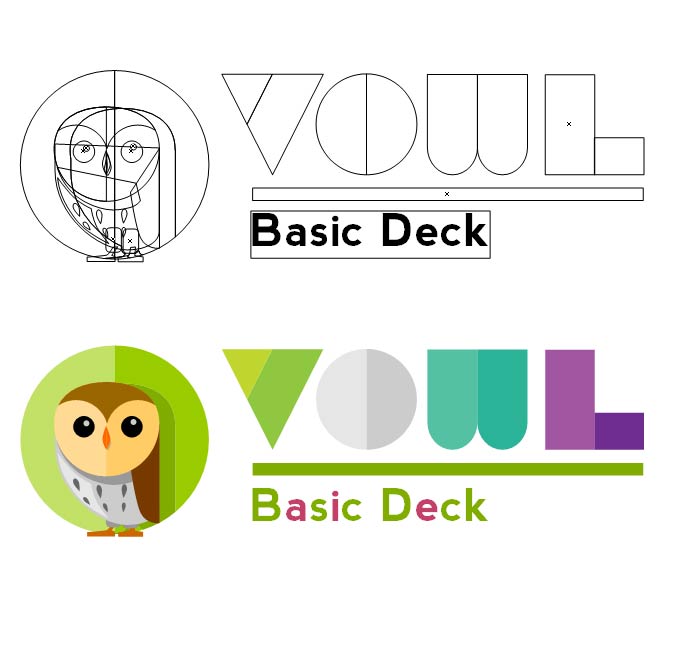 Once the initial card design where in place it was on to the game board itself, a tracker to define the players position. there’s quite a bit of detail to add here, showing which cards are in play, and a split way of showing a players position, being the progression on the track v’s another mechanism where the player can shorten the track itself to improve their chances of winning.

It’s always tough to design something that potentially holds a lot of detail, especially when you’re trying to simplify it to the most basic components and information possible. I think this is a tight as possible and ultimately works cleanly with the rest of the design. 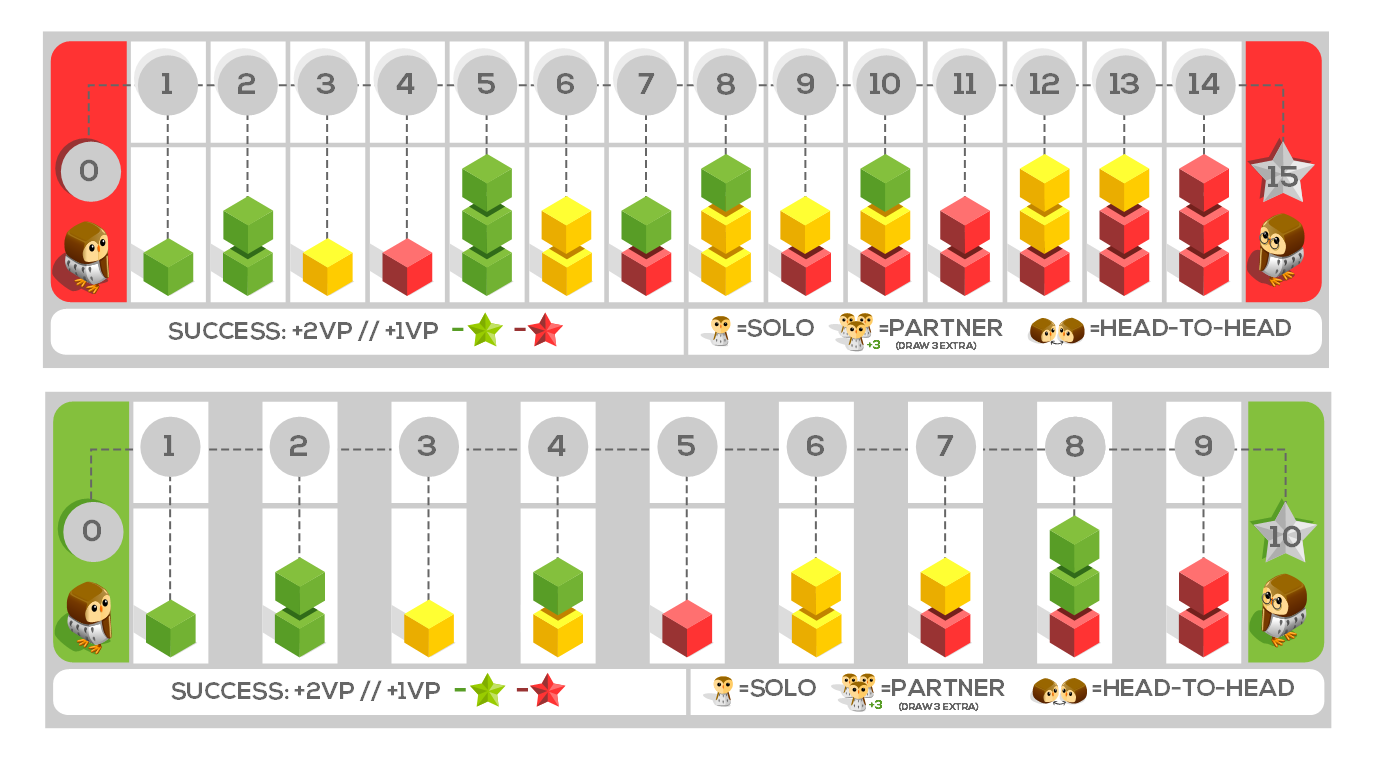 I’m really happy with this project and design overall, from a design perspective it was a relatively fast turn-around project that allowed me to concentrate more on the design of things that the illustration which is where I usually work mostly in. I think the final design is light and accessible and ultimately suites the game play nicely.

Vowl is a game by Cameron Art Games.

Race against time and your friends to recognize words without vowels in this one-of-a-kind word game with a unique scoring system.

Coming to Kickstarter on August 3rd. 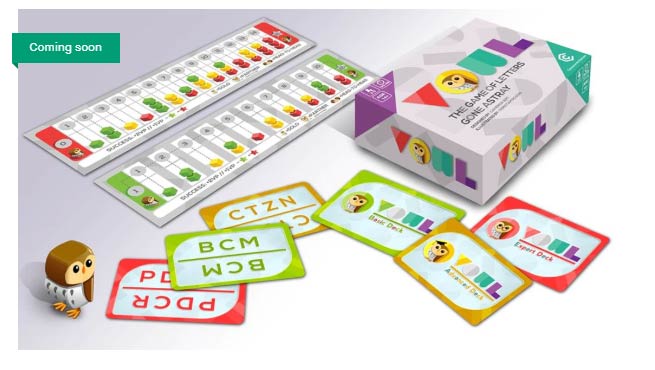 The Art of Tranquility.